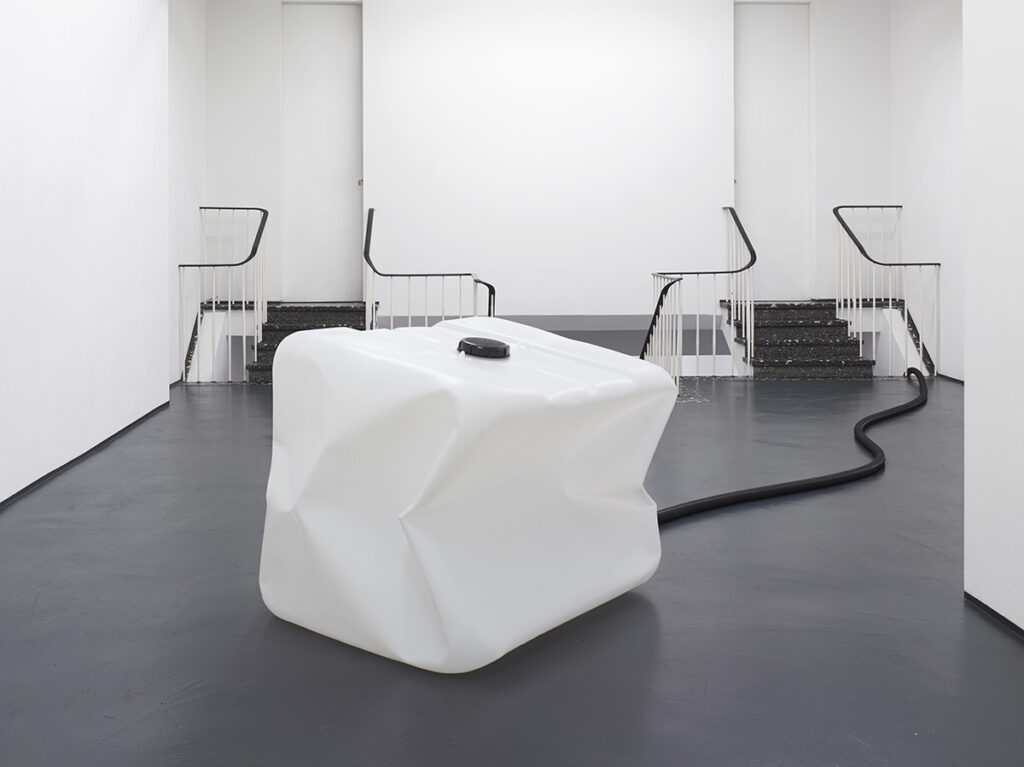 The internationally understandable title of the exhibition – Conflitti – suggests a po­li­ti­cal and social dimension that is relevant especially in our current times. And this dimen­sion can also be seen in the three works in the exhibition. Nevertheless, they function first and foremost as new solutions for sculpture.

The obviously most conflict-laden work consists of a hydraulic system, steel cables and a very strong wooden beam. The hydraulic mechanism presses a rod from a cylinder piston against the wooden beam, which is held by strong steel cables. And that for so long and with so much force that the beam breaks after some time. However, it does not break ad hoc, but after physical resistance, with many crackling, rustling and loud noises. First the wood is dented, then its annual ring layers shift due to the pressure, then finally the wood tears and splinters. During this whole process, the violence and the raw, unwaver­ing power are audible, visible, in general: perceptible.

The 225 cm high column of many thick industrial glass plates, that are unevenly cut, is on­ly held together by a vice. Each element of this labile, massive glass tower contributes to the stability of the sculpture. It would not stand without its width and depth, nor would the glass plates remain vertical without the vice. A conflict, the Latin origin of the word contains the words “con” (“with”) and “fligere” (“beat”, “bounce”), is to be seen above all in the mechanical mode of operation. The sculpture cannot exist without the glass plates having collided (it is basically a matter of standing together). Perhaps a metaphor for the (here) positive forces that become effective in the interplay.

In the third work of the exhibition, which consists of the bubble of a so-called Interme­diate Bulk Container measuring approx. 100 x 100 x 100 cm, hoses and an impeller, the bubble is rhythmically sucked out and inflated again by the impeller. When the air is sucked out, the cube becomes a crumpled object, like a Tetrapak, which ends up in the garbage after emptying. And when the air is blown in, there is the moment of the largest filling, which almost turns the cube into a ball. The industrial and – without Sassolino’s intervention – basically highly stable object becomes the plaything of the air and the fan and the resulting forces. So, if you want, the fan and the plastic object fight against each other.

In all three works, materials are exposed to direct forces, force becomes visible and per­cep­tible as a physical quantity, a quantity that is unavoidable and inevitable in these works. And thus: through this esthetic realization of physis, the works refer to and differ from the works to which Sassolino art-historically refers: on the one hand, of course, there are references to the Arte Povera of Italy. Sassolino’s materials, too, are “poor” and “simple”: glass plates are not a special material in themselves, nor are wooden beams, and the same can be said of plastic containers. In contrast to Arte Povera, however, these poor materials are not charged with personal meaning, emotions or memories. Rather, it is above all strongly reduced processes that are made visible. And in this respect there is also a reference to Minimal Art and Process Art. The difference is that Sassolino makes the direct effect of force visible and that it is not primarily about the legibility of form. This is perhaps most comparable to Richard Serra. Sassolino, however, shows this effect of force with various materials. With his forms, the cuboids of the glass plates and the wood as well as the cube of the container Sassolino refers to the cuboids and cubes of Minimal Art. But in Sassolino’s work, these figures are violently changed and removed from their form.

Sassolino’s handling of materials and forms naturally also has a political and social side. And the title of the exhibition can be used as a starting point for this. Heraclitus des­cribed the conflict, the war as the father of all things, which makes change and develop­ment possible. For Sassolino, however, his sculptures serve more as metaphorical mir­rors of the social situation in which we find ourselves: Conflicts as an inevitable constant of the “Conditio Humana” can be found everywhere. In politics, in society, in the econo­my, between nations or even in relationships. Sassolino gives his voice to these condi­tions of life. And this, as he says, by using the industry to discuss existential questions.