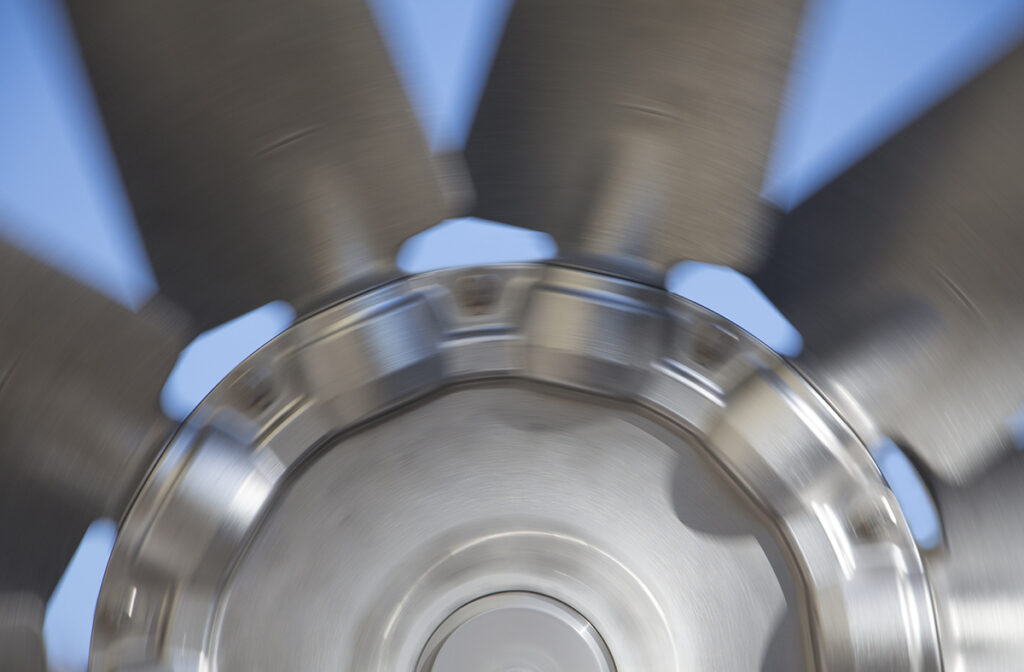 Lanciare l‘aria (English: Throwing Air) is – after Conflitti in 2018 – already our second solo exhibition with Arcangelo Sassolino (*1967 in Vicenza, where he also lives and works). Again, it seems as if Sassolino has quite consciously taken a position on one of the issues dominating everything in our world at the moment by making the air („aria“) that we breathe and that, if impregnated with the wrong aerosols, can endanger us, the content of his exhibition. And again, however, it is above all the investigation of sculpture and the possibility of creating a new relationship between sculpture and recipient that interests him.

On entering the gallery, one is confronted with a yellow-painted machine fenced into an enclosure (Il vuoto senza misura [English: The Mighty Void]), which – because of this fencing – almost looks like a wild, dangerous animal. But of course it is not an animal, but a simple, albeit huge fan (179 x 155 x 106 cm), like the ones used in tunnels all over the world to blow out bad air and blow in good air. Almost everyone will have heard the buzzing sound that greets you through the open windows when you enter a tunnel during a car ride in the summer. But of course, we tend to be only subconsciously aware of this buzzing, distracted by the noise of the cars and everything else around us.

In the exhibition Lanciare l‘aria, on the other hand, we experience the pure force and violence of the air blown out by the almost infinitely powerful fan. And we experience the noise made by the engine and the wind. Either, when the machine first stands still and is turned on for us, we experience the crescendo of the spinning engine and propeller, which first create a gentle wind relatively quietly and then can spin and storm faster and faster, seemingly almost infinitely fast. Or we feel the violence of the spinning propeller and noise directly when the engine is already running at full speed.

Besides the storm we are exposed to and experience, we see the fan itself, painted yellow, like the earth moving machines the Earth Artists used to create their monumental projects since the late 1960s (this is what Walter de Maria was referring to when he titled an over 6 meter large painting exhibited in the legendary Earth Works exhibition at Virginia Dwan’s in 1968 Yellow Painting. The Color Men Choose When They Attack the Earth, and again this is what Sassolino is referring to with his work and its color). Aside from this varnish and another minimal aesthetic alteration by a cover that Sassolino added to the fan, we are faced with an objet trouvé or Ready Made.

Unlike Marcel Duchamp and other artists, who famously resorted to prefabricated, barely or not at all altered objects from industrial production, and who transformed the objects into another form of being by shifting their context, Sassolino is concerned with the action of the machine, its performance, and thus with the air it produces, the strong wind, the mighty physicality of precisely this invisible matter, which he forces us to endure. Sculpture, then, as an experience, not primarily as a visually perceived object that we might circle and see in its various, physical forms, but which we still see as something separate from us.

Sassolino thus continues what artists such as Richard Serra or Tony Smith, among others, have begun: a spatial-physical experience of sculpture that seems so monumental or so threatening that we, as recipients, lose our distance, virtually become absorbed in the sculpture and its perception. Sassolino pushes the envelope even further by actually enabling an experience that is felt with the whole body by means of the fan that rotates at over 1000 revolutions per minute, forcing our physical engagement, even resistance.

The wind, and this is perhaps the very daily side of the coin, makes us aware not only of the air itself, but also of how vital it is, how dependent we are on it. Especially today, when it is particularly clear that a single breath can be precious or, if you inhale the wrong particles or aerosols, dangerous. Deploying the wind generated by the fan as well as dust and dirt from his studio or bird feathers or leaves fallen from ginko trees around his studio, Sassolino has created a number of two-dimensional objects that he sees as filters, not paintings. This was done by placing gridded metal frames in front of the fan and blowing the various materials through it. There are several grids in each frame, placed one after the other, so that the materials filtered out could be affixed. Thus we see – composed in all-over structures – assemblages of natural and poor materials. Unlike Italian arte povera, however, it is not the poetry of the material that is crucial here, but its very existence as something exposed to the wind, the eponymous Violent Void. The materials were cast by this void into the form ultimately to be seen, by way of a mechanical écriture automatique.

We would like to thank the Stiftung Kunstfonds for generously supporting this exhibition as part of the Neustart Kultur program.