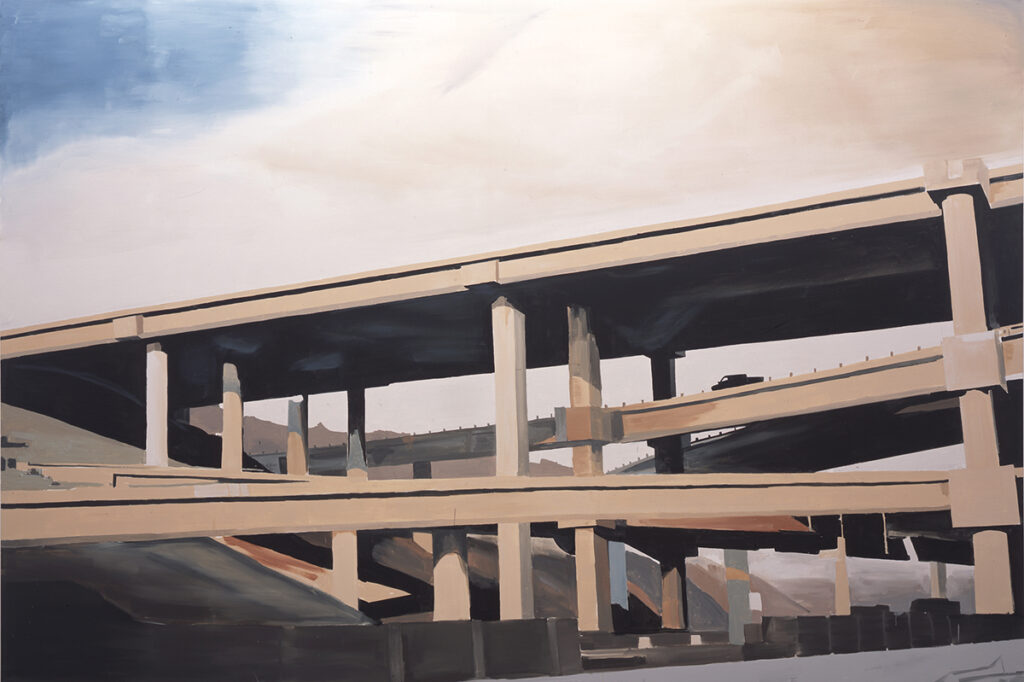 We are proud to announce our second exhibition in which we will show new works by the Belgian painter Koen van den Broek (1973). This is his first single show in Germany.

The title of three of the paintings, Dante’s View, is related to a particular landscape in the Death Valley, California. While tourists who come to Dante’s Peak admire the spectacular scene (Dante’s View) from there, Koen van den Broek renders in his paintings a rather unusual, personal view, which is dominated by the perspective given through the camera lens. Therefore, he just depicts the boring parking lot with its border, which separates the desert from the asphalt. Obviously, van den Broek does not work in the tradition of the mostly horizontal landscape painting which depicted great views and – coming with that – the sublime of nature. Instead, he chooses a meaningless location as the topic for his paintings and thereby paints a part of the existing world, which is normally totally neglected. In doing so, he is not trying to paint most naturalistic and – consequently – he is not following the narrative tradition of figurative painting, on the contrary: van den Broek cuts out the meaningful topic, which is pushed out of the painting by giving room to something which is most empty and which exists, literally, on the border.

Besides this critical questioning of classical landscape painting, van den Broek relates his work to the language of the cinema in paintings like Burning, Reservoir, or Escape from LA. Again, however, it is not the most accurate depiction of film stills, which is dominating the image, but – to quote the painter himself – it is the “dramatic and cinematic aspect” of his works, which interests him.

His paintings are created in a most intricate and subtle way: while at one time he emphasizes the accurate edge of a line, at another time he accentuates the flat surface of the painting; and while in some fields of a work the painterly gesture is dominating, in other moments the pictorial space, created with the brush, stands in the foreground. All in all, one can say that with his painterly strategies van den Broek addresses diverse theoretical questions: what shows photography and what is its able to do in comparison to painting, how and why are the human gaze and the perspective of the camera focused, how is our reception of nature and of art conditioned, how decides the artist about topics and subjects and – most important – what defines painting besides its alleged task to depict reality? These are not only formal esthetic questions to which the artist attempts to find answers. Because he is going some steps further, he is asking for the essential elements of painting and for its significance. And while van den Broek develops this endeavor, he creates paintings, as the Belgian critic Dirk Lauwaert has written, with a variety of means that saturates them with happiness and let them “burst with ambition and fearlessness”. In fact, he makes paintings “which strike around them mercilessly and recklessly”.