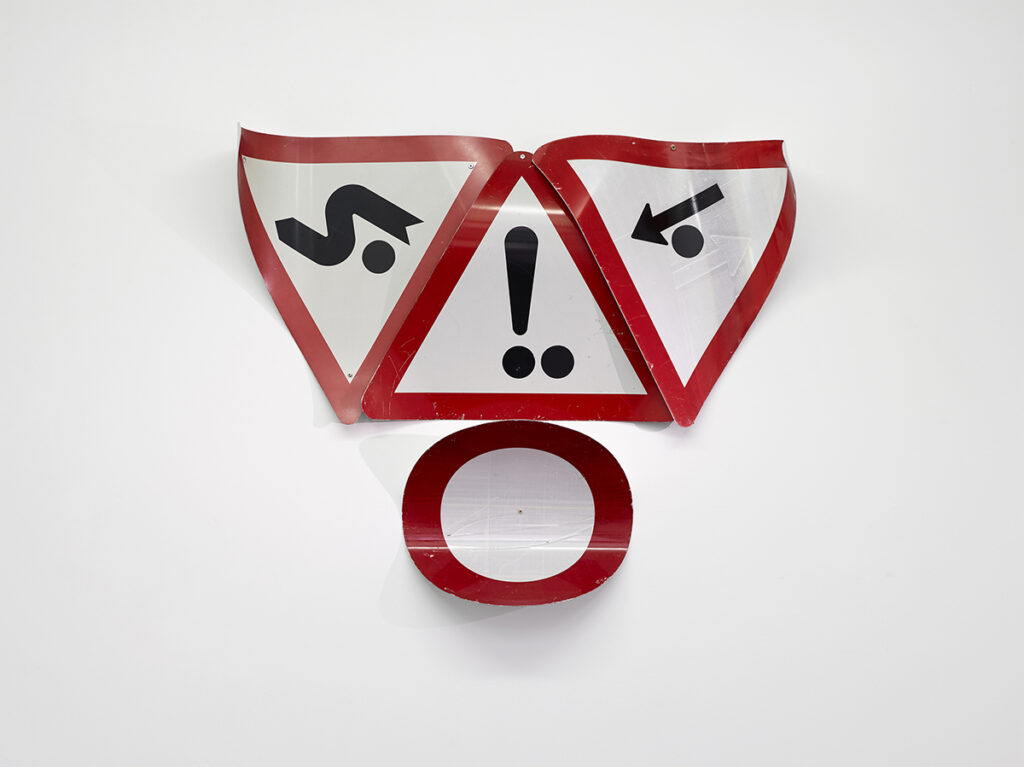 On September 7, 2018, we will open at 6 pm as part of DC Open (Düsseldorf Cologne Open Galleries) our fifth solo exhibition with Nic Hess (*1968 in Zurich, where he also lives and works). So far, Nic Hess got mainly known for his expansive installations and wall collages made of tapes and foils. With these, he deconstructed signs (logos) and symbols from the worlds of business and art histo­ry. Now, however, he resorts to his own sign-system, signs that stem from his biography or his personal environment.

For example, with the diptych Der Bauch des Architekten und seine Frau (The Belly of the Architect and His Wife) he remembers his parents who died in the past years. We see on a light blue („the archi-tect‘s belly“) and a light purple („and his wife“) paper a round belly with belly button and the stylized mons veneris of a woman – alluded to with pictogram-like lines and shapes. These forms were crea­ted through a negative process: Nic Hess placed tools from the estate of his parents (dressmaker- and architect-stencils) on the sheets and then exposed these to the sun and its merciless radiation. As before, with the adhesive tapes, he creates a „drawing“ without internal structure in the lines. And with these very reduced means he produces legible meaning. Art historically the process of the burning sun reminds us of course of Dennis Oppenheim‘s work Reading Position for Second Degree Burn: for this, Oppenheim lay on the beach for five hours, with his naked upper body exposed to the sun. On his chest, he had placed a military textbook and thus „proved“ that he belonged to the avant-garde. While the book left a white rectangular plane (Malevich) on his chest, the rest of the unprotected upper body turned, of course, red. Such existential questions of the artist‘s personality in relation to his artistic context and the world is not what Hess deals with in his work. But he creates an essentially more exis­tential portrait of his deceased parents.

Nic Hess‘ father Heinz, an architect, owned a large library on art of the 20th century. Like many peop­le in a similar situation, Hess asked himself what he was to do with the items from the house-hold and in particular with the large amount of art historical books when his father had died. And he decided to employ at least the books creatively and for his own work. By transforming the books of the library into art he created a sort of memorial to his father.

Because with the reproductions of some of the illustrated books he made collages based on the works of three artists: the Swiss Max Bill, the American Edward Hopper and the Belgian René Magritte. This is how clouds from paintings by René Magritte make up a cloud-filled Himmel (Sky / Heaven) that you can imagine over Little Hilly Town, a newly developed city that consists of the houses of illustra­tions of Edward Hopper‘s paintings. In Bills Wereld Max Bill‘s geometric shapes create a memorial with a portrait featuring Bill as a knight with a lance and gripping arms. Smaller collages also rely on reproductions of works of these three artists and playfully create homages to their lives.

Nic Hess‘ own life is literally embodied in Ohne Titel (Mit Bart) (Untitled [With Beard]), a sink in which the artist‘s facial hair has been glued on a photocopied self portrait. Many art historical refe­rences can be identified here: we can think of Marcel Duchamp‘s Fountain, the picturetraps by Daniel Spoerri or the many selfportraits in the mirror (here it is rather the reflecting sink or the water that is usually in the sink when men are shaving). That‘s how Hess, in our exhibition, connects his life artisti­cally with that of his parents.

In the lower exhibition room, this is continued with a Swiss legend that has not only accelerated Nic Hess when he was a child, but undoubtedly provides pleasure around the world: the Davos sledges where Hess extended the wooden slats and turned the sledges into dynamic objects that are able to depict the speed of a sledge also in the state of standstill – the sledges have been transformed not into a pack of wolves, but rather into playful, almost baroque-looking forms.

The Verkehrsgeist (Traffic Spirit), a relief of rolled traffic signs, which responds to the viewer with a somewhat angry gaze from the central wall in the gallery, refers mainly to Nic Hess‘ own works: em­ploying found signs, changeing and transforming them into new compositions. And ultimately this is questioning the distinct readability of the signs and it presents new, humorous solutions.