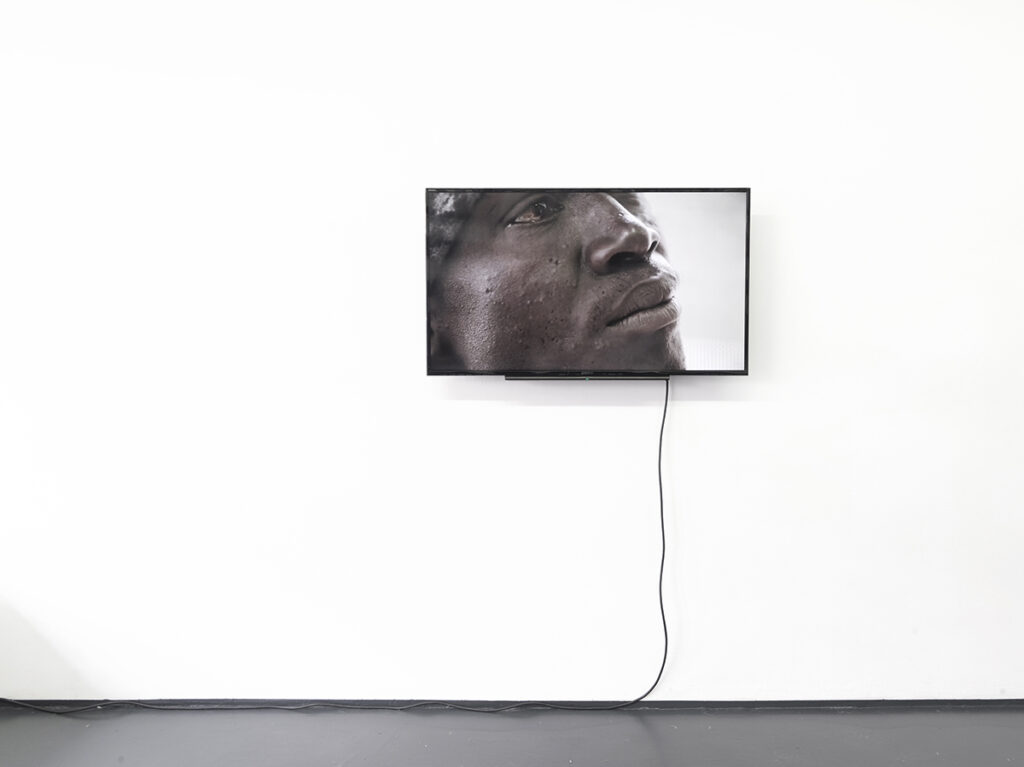 We are pleased to announce with Cristal House the inauguration of our fifth solo exhibition with Anna Malagrida (*1970 in Barcelona, lives and works in Paris) on May 3, 2018 at 7 pm. Malagrida’s œuvre can – in general – be characterized as content-wise very much interested in societal and political topics, formally consistent, and – finally – as driven by a lot of empathy for the human being. This is also true for the latest group of works:

In 2016 Malagrida won the Carte Blanche PMU award. PMU is a company that operates betting offices throughout France and in recent times in so-called “Cafés” that allow the gamblers to cash-in immediately eventual winnings up to EUR 3.000. Also, PMU awards the eponymous art-price and thus Anna Malagrida could exhibit her project at the Centre Georges Pompidou before showing it at Philipp von Rosen Galerie.

Cristal House is the name of a racehorse. With this title, Malagrida not only points towards the company who’s betting shops, occupied by the protagonists of her work, are shown and criticized in and with her project. With the title she also points towards the fragility of the hopes and dreams of the gamblers, inherent in their bet. In her new project, Anna Malagrida draws upon photography, text and video in order to envision the pauperization to be experienced within the betting shop that is located in the very center of Paris, close to the Centre
Pompidou.

From the street and through the large windows, she shows us with three large-scale photographs monotonous moments and the patient waiting of the gamblers. While the architecture of the Centre Pompidou is mirrored in the store windows of the betting office, the gamblers are visible through them at the same time (the store can be thus metaphorically described as an aquarium). Black as a symbolically charged color dominates the images, brightly lit elements create a narrative frame. Inside the store Malagrida met the gamblers and
listened to them attentively. She collected their statements on dreams, hopes and fears (please see below for these statements). Due to their ideas of a better life, a large majority of the gamblers are North African migrants that are lured into the great megalopolis. The notions of dreaming and the inherent hope to every gambler unfolds into the image of the one who migrates.

The betting house is transformed into a theatre of hope; the metropolis becomes a transit space of fortuitous intersections, and a multiplier of solitudes. With the photographic series Les Mains, Malagrida observes the gamblers hands up close. These hands and their gestures are shown as existing outside a clear sign system. For Malagrida, the imagery of hands does not have a predefined structure, nor does it form a logical system. The gestures are ordinary, sometimes related to activities carried out by a gambler, but sometimes also involuntary. Some of these depictions of hands seem to express anger, others joy; some are welcoming, others hostile.

For the video installation 25 rue du Renard, shown in our basement, Malagrida filmed out of the store and onto the streets. Here the gamblers are only recognizable as silhouettes and shadows. As in the large-format photographs, the color black congeals into a symbolic force. Only the gambler Khadim from Mali agreed to be filmed so that he could be
recognized. With L’Attente Malagrida observes him watching a horse race on screen.