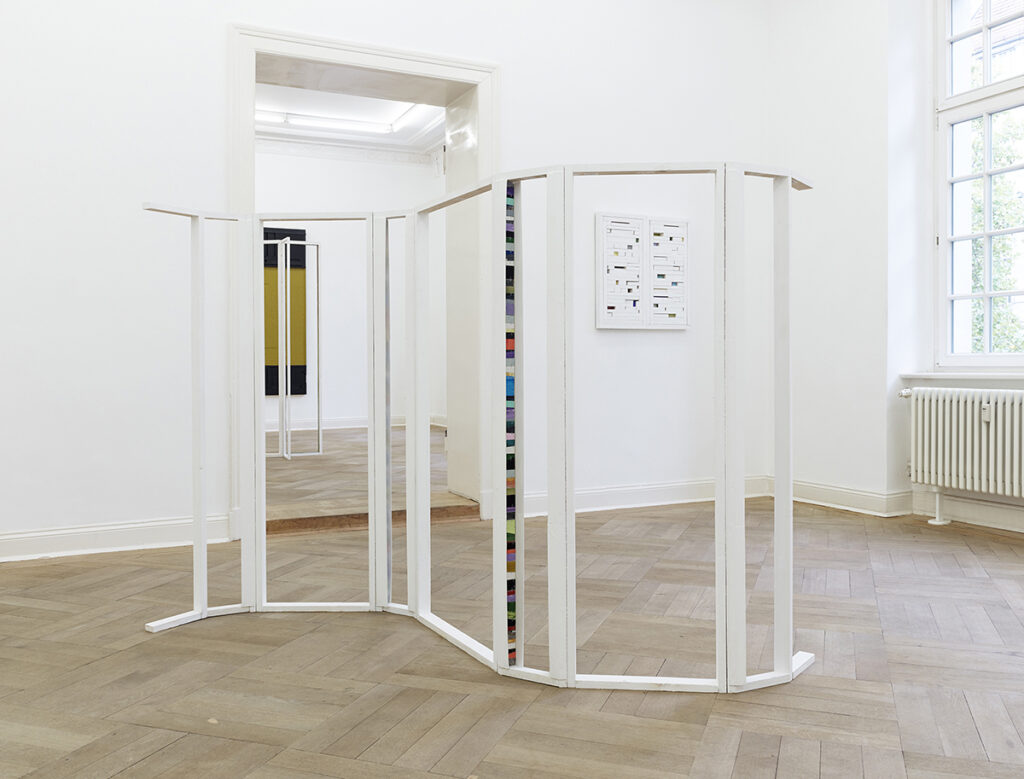 We are pleased to open on August 29th at 7 pm the first solo exhibition of the Austrian artist Florian Schmidt (*1980), who lives and works in Berlin.

Florian Schmidt creates pictorial frames through which he is exploring the relation of space, material and color. This research results in two-dimensional works for the wall and freestanding sculptures. In our exhibition Ambit we show eight wall works and two sculptures, which Schmidt set up all with wood laths, cardboard, vinyl color, screws, and stapler pins. This work process is both formal and content wise central in his work.

The structure of his pictures is related to the empty frames, within which single wood laths build a construction on which image carriers can be mounted. Each of these elements is used by the artist fully equal and without deducting a hierarchy from its original function within the image. As a matter of fact Schmidt goes further. He is using these different materials not only without minding its original function, he rather attempts to deduct the actual design of the works from these materials, by being guided in his composing decisions by the available forms of the existing materials.

The result of this approach is an amalgamation of the construction of the picture and the picture motif, as it becomes visible in the work Untitled (Whitespace) 01 (2014). Within the 72,5 x 35 cm large wall work Schmidt repeats the motif of the white frame of wood laths five times until in the centre of the image remains only a 4 cm deep cubic space. Even though the white laths are adjacent tight to each other they don’t create a homogeneous white surface, but the small intervals appear as lines, which intensify the three dimensional impression of the image in a graphic manner.

Here Schmidt relates to ideas of Frank Stella and Alexander Rodtschenko: The Black Paintings by Stella, in which Stella was deducting the width of the stripes by the thickness of the image carrier. And the spatial constructions by Rodtschenko, which are based on linear primary elements, whose form he redundantly stretched around its original axes. Schmidt stops the process of putting the laths together before the pictorial space is completely filled, then he closes the gap from the backside with painted cardboard. This way of using color is distinctive for Schmidt. While elementary parts of the work arise from a seemingly inherent necessity out of the material, he acts contrary to a possible caginess of his work with his free and intuitive use of color. Color works here as a subjective addition to an almost objectively self-constituting Gestalt.

The lines created by the intervals between the wooden laths elucidate the formal relevance of the work process as a designing motif, the relevance for the content can be illustrated with the work Untitled (Digue) 1. Also within the 210 x 170 cm large work from 2014 a fundamental part has been created from an interval, but while the intervals in the work described above simulate a drawing in Digue the image carrier itself is created out of an interval: the surface of the work was done with pasted wood shavings, which are left-overs from sawing wooden plates for a former work.

To draw on the residuals of earlier works as a source material for new works is of major importance for Schmidt. He reduces the importance of finishing individual works for enhancing the process of its creation. Color, texture, material, form and measure are constantly examined by Schmidt and put into new relations to each other. As for him it is not about the terminal masterpiece but rather about elaborating of possibilities in always new and changing conditions. Or as Stephanie Damianitsch wrote: “Schmidt’s working method thus proves to be a process of cyclical contemplation, a rotation in which existing works enter into new relationships with the dynamics of the artist’s working method, for which repetition is a decisive factor. Repetition as a driving force that transfers the act of becoming as a time factor into a topological order of relationships never appears as reproduction but rather always as variation.”

Florian Schmidt (*1980 in Raabs, Austria) lives and works in Berlin. After and during his studies at the Academy of Fine Arts Vienna and University of Fine Arts Hamburg, Schmidt exhibited his works internationally in Group- and Solo-Exhibitions. E.g. Skip in Galerie Huber in Vienna; Armatures in New Gallery New York; Florian Schmidt at the Kunsthalle Krems Factory, in the Center for Contemporary Art in Peekskill New York; Faces and Facets: Recent Acquisition in Princeton University Art Musem, Princeton; Revised Abstraction at Grieder Contemporary, Zurich; oder so: Malerei konkret/abstrakt at Overbeck-Gesellschaft, Lübeck; Collaborations at Autocenter, Berlin and Future and Reality at 5th Beijing International Art Biennale, National Art Museum of China, Beijing.