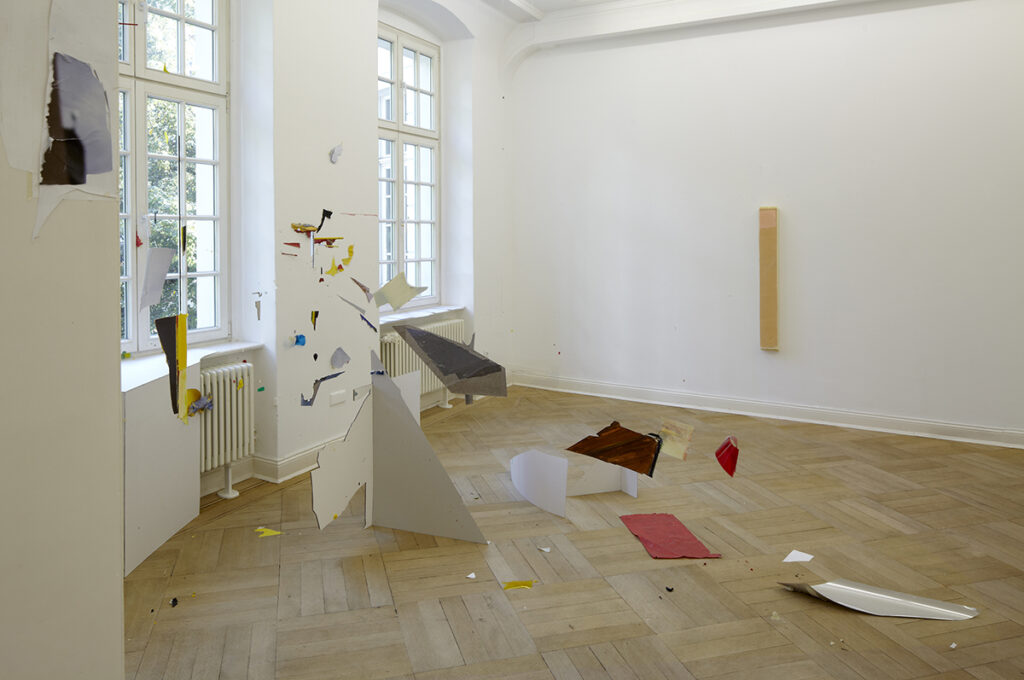 German artist Blinky Palermo was interested in the sensually perceivable painterly aspect and explored more and more the ‘objectuality’ of the painting by choosing textile as a material or identifying the paint with the used material. Also beyond the classic painterly media the relation between a single color and the boundary of the image and to the site specific conditions was an important part of his exploration. With balanced series of images and constellations of works he was experimenting with the interaction of objects and space as with color.

40 years after Blinky Palermos first participation in documenta 1972 his reflections and strategies are still very present in the contemporary art. In our exhibtion Der Geist von Kurumba oder Farbe lügt! we present an international group of six young artists exploring the relation of industrial materials, painting and space.

Sara Barker creates sculptures that cut positions into the space. Her fragile constructions, composed of aluminium and various paints, create three-dimensional drawings, which produce new spatial proportions and generate thresholds. Barker constructs transitions, whose materials assume seemingly impossible stances. Whilst ostensibly formal and certainly reticent, Barker’s work takes influence too from notions of the sentimental and romantic. Barker often makes use of quiet literary references to allude to something otherwise unspoken in the work.
Sara Barker (*1980) lives and works in Glasgow. She studied art at the British School at Rome and Glasgow School of Art. Barker’s work has been included in the recent exhibitions Frauenzimmer, Museum Morsbroich, Leverkusen; The Morning After the Big Fire, Ville du Parc Contemporary Art Centre, Annemasse, France; Open Eye Club, Tramway, Glasgow. Sara Barker is represented by Mary Mary in Glasgow.

Alexander Heim‘s practice encompasses video, installation and sculpture, and adresses those intrusions into urban life where animals, processes and chance routines create a self sustaining pockets of otherness. His work is oriented towards the exploration of the thin line seperating the artificial and the natural, by suggesting a tantalizing parallel between the acceptance of existing objects in art and the integration of manufactured elements in nature.
Alexander Heim (*1977) lives and works in London, where he studied at Goldsmith College until 2006. Heim’s work has been included in the recent exhibitions Just Photography, Ancient & Modern, Martos Gallery, New York; Yesterday Will Be Better, Aargauer Kunsthaus, Aarau and was presented with a solo exhibition Bonnets Nouveaux at Kunstverein Freiburg. Heim is represented by Galerie Karin Guenther in Hamburg.

Gyan Panchal investigates the hidden qualities of industrial material. Starting from standard substances that compose today’s environment, his work questions our codes for constructing reality. He is interested in the making and the use of these standards, considering the material from its origin to its potential outcome. Combining the manufactured with the hand-made, function with ornament, abstract with fetish, future with primitive, reality with fiction, Gyan Panchal proposes an unresolved approach to contemporary signs of production.
Gyan Panchal (*1973) lives and works in Paris. He studied at the Jan van Eyck Academy in Maastricht. His work was included in the recent exhibitions Pour un Art pauvre, Carré d’Art, Musée d’art contemporain, France; We Make Versions, Westfälischer Kunstverein, Münster, Germany; Paris-Delhi-Bombay…, Centre Pompidou, Paris, France. Gyan Panchal is represented by Frank Elbaz, Paris.

Michail Pirgelis explores the sculptural possibilities of decommissioned airplane parts. His works oscillate between readymade, appropriation and autonomous sculpture, but they also transcend these categories, not least of all through the material which he favors. Through the treatment of the artist – the acts of cutting, collaging, highlighting, covering and polishing – the airplane parts reacquire an aura which mass air-transportation has taken away from aviation.
Michail Pirgelis (*1976) lives and works in Cologne. He studied at the Kunstakademie Düsseldorf. His work was included in the recent exhibitions Plaisir du Jarin, Museum Morsbroich Leverkusen; 3rd Thessaloniki Biennal of Contemporary Art, Thessaloniki; Moraltarantula, Zollamt Oberhafen Hamburg. Michail Pirgelis is represented by Sprüth Magers, Berlin/London.

Chadwick Rantanen deprives familiar objects of their expected function. By isolating them from their practical purposes, and minimizing their saturation, entertainment value and information, Rantanen questions when an object becomes an artwork and when architectural elements, framing devices, or pedestals, begin and end. His anodized telescopic sculptures are like gaps or spatial incisions. These shy and awkward objects, balanced between the desire to appear and visual reticence, don’t leave traces in the exhibition space and could be adapted to the dimensions of any average-sized gallery.
Chadwick Rantanen (*1981) lives and works in Los Angeles. He studied at the University of California, Los Angeles (UCLA). His work was included in exhibitions such as I Think and That Is All That I Am at Thomas Duncan Gallery, Los Angeles; The Museum Problem at Frutta Gallery, Rome; Ryan Foerster, Jessica Jackson Hutchins, Chadwick Rantanen at Laurel Gitlen, New York. Chadwick Rantanen is is represented by Standard, Oslo.

Diana Sirianni is questioning the basic conditions of painting. Her site specific interventions are three-dimensional and in process. With paint, paper, silicon and tape Sirianni resolves the border between the image and the world. Colored blurs disperse on walls and ceilings like traces of an accident. Only our point of view assembles the marks into a connected structure, which abnegates the deepness of the space. Diana Sirianni (*1982) lives and works in Berlin. She studied at the Accademia di Belle Arti in Rome and at the University of the Arts in Berlin. Her work was included in exhibitions such as Absolventenausstellung, UdK, Berlin, Unwrapping Candies, School of Visual Arts, New York, Die Gesetze der Malerei – § 1 Ein Gemälde hat einen Rahmen: Diana Sirianni, Espace Surplus, Berlin.