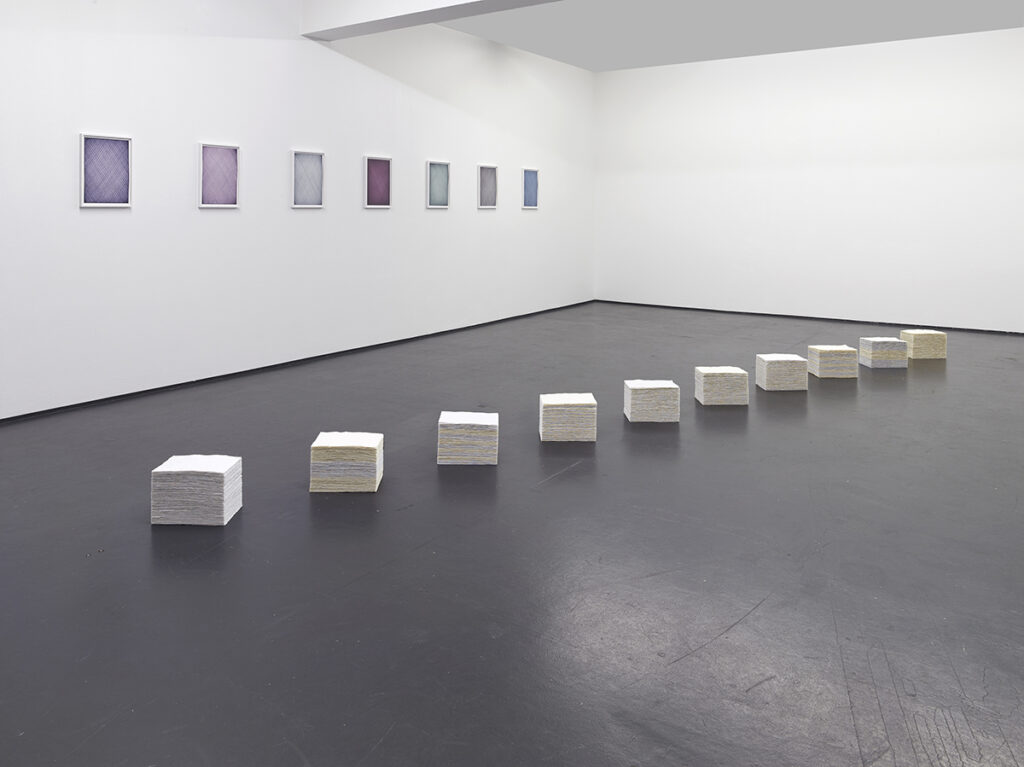 We are pleased to announce with Form und Farbe / Analyse und Synthese the opening of our third solo exhibition with Ignacio Uriarte on the occasion of this year’s DC Open on September 8, 2017 at 6 pm.

The title of the exhibition on the one hand refers to the geometrical and physical-sculptural elements and qualities of the drawings and the paper installation in the first part of the show. On the other hand it relates to the viewing experience in the second part of the show that can be described as a synthesis of the four employed colors black, red, green and blue – the standard colors of our office worlds. Uriarte is thus using two different ways of dealing with form and color.

Characters (Schriftzeichen) done in these basic colors introduce the exhibition. For each of the four drawings a color has been chosen and each color is again allocated to a sign, respectively as a rudiment of a sign. The “signs” (an “E” or a “3”, an “S”, an “L” or a “C”) are ambiguous and give the impression as if they had randomly fallen onto the paper. But at the same time they have been scribbled with the greatest precision. When it comes to Uriartes oeuvre we are familiar with the act of scribbling as a drawing process, which at the same time is an implication of writing in its most basic form.

The other works of the first, analytic half of the exhibition examine “proper” forms for certain colors. A black, rectangular grid lets negative forms arise from the paper like sources of light. One could also think of latticework, chocolate bars or TV screens stacked onto each other. Anyway, Uriarte relates the color black to the right angle, just as squares were considered to be necessarily black in the Montessori school he went to as a child. According to Montessori, the color red is assigned to a circle. Uriarte, however, draws and scribbles circular dynamic shapes in which the axes of a cross are gradually being folded apart. Not only the pieces of this triptych (Red Crosses / Rote Kreuze) seem almost sculptural, but also the two elements of Negativ und Postiv (Negative and Positive), that have seemingly been pulled apart. Here, the blue shows a color gradient that suggests a three-dimensionality, just as if light fell onto a round object. The greens of Ovales Echo (Oval Echo) slightly differ as a result of scribbling with two different pens. It’s like a demonstration of the difference in the supposed sameness, and reminds us of two glasses overlaying each other.

The analysis culminates in Rautenquadrat (Rhombus-square), which is a readable and steady climax of mixture. The basic colors are being mixed with one more colour in each smaller square moving inwards. As a result, in the smallest square each side consists of all of four colors.

On the gallery’s lower floor the four colors are then being applied in a dirtier and very painterly mixture, making a distinction impossible. We see a layer of lines or – as is the case with the installation Thirds – papers (in two different colors, a warm and a cold white), in which the single elements disappear.

While the 7 works of the group Kölner Leuchten 1–7 (Cologne Glow 1–7) do evoke textile associations, Horizonte 1–3 (Horizons 1–3) remind us of the most simple sort of landscape. Gradients suggest space while the lack of color in the top part of the drawings may symbolize the horizon, as suggested in the title. So, is this alluding to the lower Rhine region, where Uriarte grew up and where you already know on Saturday, who is coming for tea on Sunday? No, Uriarte is not working as narratively or even anecdotical. However, his synthetical color play allows the viewer such associations with – for example – classic painting.

Ignacio Uriarte gained recognition for his work by using tools of the mundane, daily office life. Through the repetition of casual gestures and the decontextualization of used materials works come into being that refer in form as well as in content to the Minimal and Concept Art oft he 1960s and 1970s. Alongside drawings, his oeuvre also consists of installations, videos and sound works.

Throughout the last years Uriarte has been included in numerous international solo and group exhibitions. Some of his works are part of the Sammlung zeitgenössicher Kunst der Bundesrepublik Deutschland, the Sammlungen der Berlinischen Galerie, the Städtische Galerie im Lenbachhaus in Munich, Museum Ludwig in Cologne and the Fundación Colección JUMEX in Mexico. At the moment Uriarte is part of the group show Art & Alphabet at Kunsthalle Hamburg (through October 29, 2017).