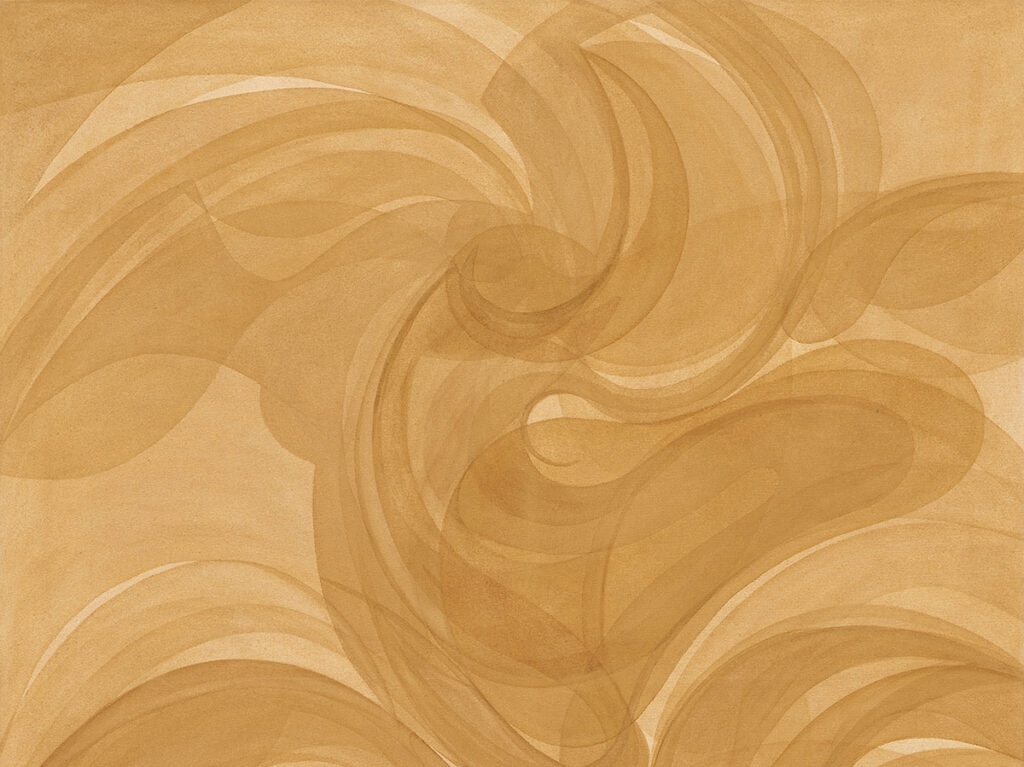 It is a great pleasure to be able to show and open to the public for the fourth time in our gallery a solo exhibition by Yelena Popova (*1978 in USSR, lives and works in Nottingham, UK).

With her exhibition Landscapes of Power (the title references a book by Sylvia Crowe, Landscape of Power, published in 1958) Yelena Popova in a way returns to her be­gin­nings. Working across a range of media in­clu­ding painting, installation and tapestry, Popova’s research project addresses an ongoing fascination of the nuclear history and ma­teriality. Her first show in our gallery Un­named presented works which were re­searched and de­veloped during her MA at Royal College of Art in London; amongst these works were two artist-documentary videos which dealt with the hi­s­tory of a nuclear disaster (1957) that had ta­ken place in Ozyorsk, USSR, Popova’s home town, a se­cret closed city, which was the birthplace of the Soviet nuclear-weapons program.

While her two other previous exhibitions at the gallery were dedicated to the topic of time in re­la­tion to ca­pi­ta­lism, the pro­duction and distribution of goods and services, Popova now again picks up the nuclear subject with Landscapes of Power. The title, that has a double-meaning, not only alludes to the systems of power (companies, governments) that stand behind the pro­duc­tion of energy in general but al­so to the production of energy itself. Over the last year Popova has been vi­siting decommissioned nuclear sites around the UK as part of a self-appointed enquiry. She vi­si­ted seven Magnox-re­ac­tors of the first generation to disco­ver that they currently cannot be dis­mantled and will have to remain on the Bri­tish coastline until at least the end of the century, thus becoming themselves a pile of con­taminated waste, and also a mo­nu­ment to the problematic de­cisions to­wards nuclear energy and its everlasting impact on our nature and societies (the half life of the conta­mi­na­ted graphite is about 5,000 years). And she walked the surrounding land­scapes and gathered soil and stones. With this exhibition Popova attempts to make tangible the close links be­tween the nuclear industry, and its invisible impact on our landscapes through the pas­sage of time. While in her earlier shows Popova explored the passage of time and its economic value, pain­ting’s temporality (her Evaporating Paintings series) and the in­fi­nite circular move­ments of the financial world, she is now pointing towards the deep-time (geo­logical time) in our age of the anthropocene.

The central installation of our show, The Scholar Stones Display, consists of pe­des­tals with scho­lar stones. The pedestals are slotted into the pa­nel floor, representing the geometric design of a gra­phite core of a nuclear reactor. Together with the three surrounding Jaquard-wo­ven tapes­tries, the whole ensemble serves as a metaphorical monument to the nuclear re­actors Popova vi­si­ted – and how they need to be understood as entities that exist in close correlation to their space, geology, land­scape, the time in which they last, and their industrial history.

The Scholar Stone Display in fact presents what one can call the contemporary version of a “scho­lar stone”: Originally, a scholar stone was a naturally occurring or shaped rock that adheres to a set of esthetic principles defined in Tang dynasty China (618-907 AD), which would be displayed and admired as objects of contemplation. Popova’s collection re­presents different geological areas of the UK, as well as the different geological time of the rocks. The scholar stones (which as an art form represent an early human engage­ment with abstraction) have been placed on their woo­den pedestals as objects of contem­pla­tion as well as documents (or souvenirs?) from Popova’s jour­neys.

The two tapestries titled Keepsafe (I and II) are meant as artistic propositions for mauso­le­ums for the decommissioned reactors – mausoleums we already know from Chernobyl, the in­fa­mous Russian site of a collapsed nuclear plant, and which we will know from Fukushima, once their construction has been finalized. They show, in a very abstract way, the graphite core of the reac­tor, and the pro­po­si­tional mausoleum built above it, surrounded by the sea­scape where most of the reactors in the UK are located. While they might stimulate us to ponder the hi­story of nuc­lear energy as well as of nuclear weapons, the third tapes­try, Ripple-Marked Radiance (after Hertha Ayrton), is an homage to the first female mem­ber of the In­stitution of Electrical Engi­neers, Hertha Ayrton (1854-1923), who stu­died electric current at the very beginning of electri­ci­ty production.

With color material based on the soils collected at the sites of the reactors (as well as with wood-ash) Popova painted a group of canvases, employing her elegant, curvy modernist forms that she used also in earlier installations of paintings. Now, with the pigments gained from the soils, these forms appear in earthly colors (shifting from greyish to red­dish tones, depending on the land­scape the soils were taken from). The canvases thus connect to the landscapes, their geo­lo­gi­cal composition, and their history as well as to the modern, utopian, formalist, constructivist his­tory of the ancestors of Popova’s own pain­ting, namely Lyubov Popova, Natalia Gontscharova or Alexandra Exter, to name just a few. While the utopian idea of an unrestricted amount of avai­lable energy certainly was part of the modernist history these artists belonged to, the organic, painted forms also al­lude to the radioactivity that still is active at the sites of the derelict reac­tors.

To summarize: with her project and through the mass of the collected rocks, and the sen­sual (tac­tile) quality of paintings Popova makes nuclear industry tangible.

Yelena Popova (born in USSR) lives and works in Nottingham, where she has a studio at Pri­ma­ry. She studied at Moscow Art Theatre School (MHAT) before graduating from MA Painting at the Royal College of Art in 2011. Recent solo exhibitions include: Her Name is Prometheus, L’étrangère, London; Townlets, The Art House, Wakefield (2018), Ele­ments, Girton College, Uni­ver­sity of Cambridge; This Certifies That, Philipp von Rosen Ga­lerie (2017), After Image, Nottingham Contemporary (2016) and Unsensed, Hatton Gallery, Newcastle (2015).