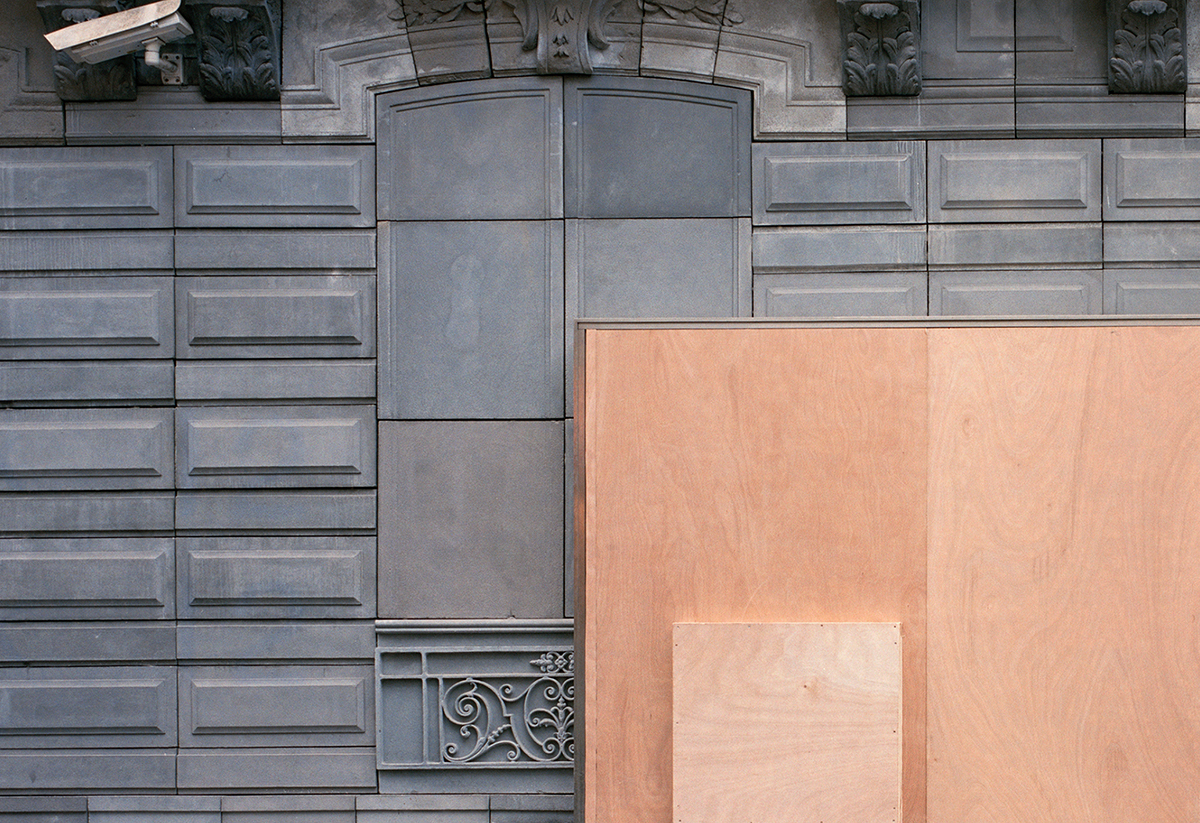 In her sixth solo exhibition at Philipp von Rosen Galerie, Anna Malagrida fans out three series under the title Paris fatigué. Les années 2018-2021, Anna Malagrida presents three series that were created over the last three years and directly refer to current social crises. Thus, the rampant Covid-19 pandemic and the marches of the Yellow Vests movement in the French capital form the starting point for the most recent works of the artist, who lives in Paris and Barcelona. Malagrida always starts from observations of her surroundings in order to fathom more complex social contexts. In doing so, she understands the city as a body whose expressions and susceptibility she detects by means of striking characteristics. Accordingly, in her site-specific, organically evolving photographic and filmic works, superficial occurrences symptomatically point to profound structures of change.

The series Paris barricadé consists of photographs of shop windows from the center of Paris, namely the area around the Étoile and the Champs Elysées, which have been boarded up with plywood by residents and shopkeepers to protect them from the often violent protests of the Yellow Vests, which have regularly taken place on Saturdays since 2018. The day after the demonstrations, Malagrida and her life partner, photographer Mathieu Pernot, went to the area of the street battles. Here, the artist couple‘s experience of reality is strikingly different from the scenarios of Paris going up in flames that have been spread via social media. Everywhere, there was not so much a Sunday-like calm as a ghostly calm. This disproportion between the catastrophe spread by the media and the silence on site reflects a social imbalance that fuels rebellious tendencies through heated moods.

The panels are inserted without gaps into window and door openings of the elegant buildings, sometimes porches surround a stately entrance area. Malagrida‘s series of single images soberly shows typological variations of the motif – taken from a frontal perspective and under unchanging conditions. The improvised, temporary interventions, which stand out from the solid masonry, are adapted to the well-kept standard of the buildings and the affluent neighborhoods. Going beyond the purely documentary character of the shots, the frequent repetition lends these elements in their multiple forms an independent pictorial value that follows a minimalist aesthetic and also alludes – not least through the consideration of color values – to the contrasting relationship between figure and ground. In their almost exact formal correspondence to the vulnerable parts of the building, the carefully fitted panels depict them in a symbolically reduced form – like cut-outs – in a quasi-representative manner. The preventive precautions thus designate zones of permeability and potential attack surfaces, but are in turn, through the offensive defensive posture inscribed in them, unmistakable, even provocative signs of aggressively charged fear. Concise in form and content, Malagrida‘s images have an extremely strong effect. Not only do the sealed buildings refer to a cityscape in a state of emergency. Rather, they assert themselves as symbols that metaphorically illuminate the theme of visibility, accessibility, and ultimately, on a sociocritical level, belonging.

The wooden panels embody above all the reinforced border between outside and inside, between public and private space, between the common good and individual prosperity, where the contrast between social groups, but also the existential duality between one‘s own and the other is played out: The sharp juxtaposition between exclusive clientele and less affluent populations is ultimately mirrored in the shop window of the luxury boutiques themselves. The reinforcement by the constructed wooden panels thus underpins the symbolic power of the display windows as clear dividing lines, as evidence of a division, where differences are formed and margins emerge, from which the excluded and disadvantaged ultimately organize themselves into protest groups, which are then perceived as a threat. In the field of tension between socio-politically charged, opposing points of view, Malagrida subtly poses the question of perspective in order to relativize the narrow classification of perpetrator and victim, the clear distinction between attack and defense: The positioning in front of or behind the barricade determines the perspective and the adopted one-sided view (excluding the others in each case) from which images of the enemy emerge.

During the spread of Corona, the mouth-nose protection became an attribute of the individual in face of a health threat and acquired importance as a universal sign of a new pandemic reality. A reality that – similar to the covered shop windows in Paris barricadé – is characterized by a defensive posture adopted to protect against an external threat – whether it is the attack by a militant civil movement or a virus.

Anna Malagrida‘s Les passants series is based on photographs and videos of individual residents of Paris taken between the first lockdown in March 2020 and February 2021, when daily life in France was heavily dominated by government-imposed measures to combat the pandemic. Malagrida sets up her camera in eleven different locations within the urban area, whose point of view remained fixed. Malagrida captures people during their daily walks through the neighborhood, whose radius of movement and temporal duration were strictly limited. The resulting photographs seem like records of the fleeting passers-by. But the passing of time is also captured through the changing courses of light and shadow and presented as a counter-image to the stagnation in which society remained. It is precisely against this backdrop of the state‘s intensified separation between interior and exterior space that Malagrida deals with methods of surveillance and control. Her solitary appearance in front of the camera reflects the isolated appearance of people in a public setting – a symbol of their isolation. At the same time, this reflects the exposure of the individual, in the sense of making him or her visible at a time when restrictions on contact and extensive invisibility in public are at stake.

Finally, the installation Paris confiné, consisting of a postcard stand filled with sixty postcards, also revolves around a conflict of reality. On these postcards are photographs that Malagrida and Mathieu Pernot took of the historic but deserted center of Paris when curfew and travel ban determined the metropolis‘ appearance from March to May 2020. While the city‘s tourist attractions appear printed on the front, the back bears handwritten words by Malagrida and Pernot that emerged as neologisms during the pandemic, spreading a kind of sentiment of an alarmed public. Malagrida and Pernot then send them to each other (at their shared Paris address). In a witty and humorous way, the traditional function of the cards is thus counteracted, namely to convey an archetypal impression of a holiday from afar. In the contrast between illustration and text, show and reverse side, the feigned reality of ideal tourist images is confronted with the everyday, sometimes unpleasant reality of Paris as a place of “longing“. In the contrasting views, partly irreconcilable realities exist side by side – or even points of view.