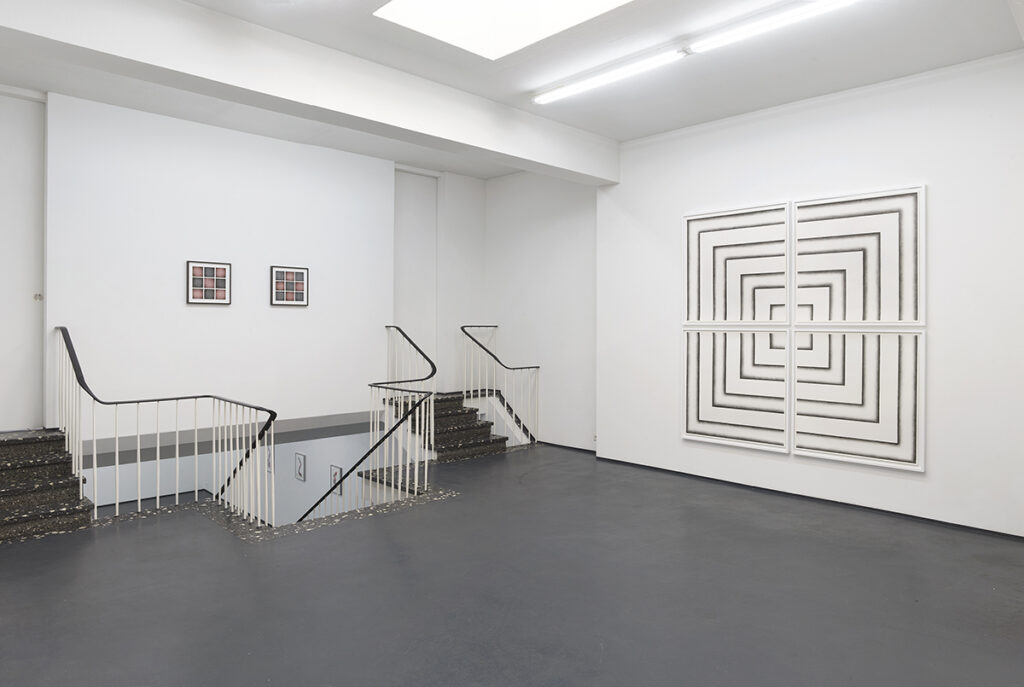 Ignacio Uriarte will be showing his fourth solo exhibition in our gallery in September and October 2020. While the title of the exhibition – Space Divisions – might make one think that the gallery space itself is once again divided (as happened in 2017 with the paper installation Thirds), it is much more the pictorial spaces of the exhibited works that are subdivided in a variety of ways and by means of drawings.

In Space Divisions, Uriarte limits himself on the one hand to the two tones black and red (and the intermediate tones achieved by mixing them). In the world of the office and business administration, which is of great importance for Uriarte’s œuvre, these colors play a decisive role as signs of positive or negative development (in the earlier group of Upper & Downer-drawings he translated this reference into typed percentage-sign drawings). And in sculpture, positive numerical values (black) and negative numerical values (red) conceptually correspond with positive (material) and negative space (emptiness or lack of space). In Uriarte’s works there are references to both: the space in the drawings is structured into positive and negative areas, but it is also about writing, noting, scribbling – gestures that are close to recording numerical values. In this respect, the ambivalence between artistic and banal (office) activity, which is typical for Uriarte, also exists here.

On the other hand, in the works of the exhibition Uriarte relies on three techniques of color application, respectively the media used: he scribbles with an ink pencil, as mentioned before, he types with a typewriter and he ‘paints’ lines with a permanent marker with the help of a drawing table. If you like, Uriarte demonstrates different ways of spatiality in his drawings – at the same time he omits the perspective-illustrative drawing.

In the diptych Two Orders with small, scribbled, organic forms, the right-hand side appears as if an angry artist / author had wiped his hand through the forms of the left-hand side, which are neatly arranged on a rectangular grid, thus creating a seemingly chaotic, unsystematic composition. Order (grid on the left) versus chaos (flying forms on the right) come to mind as concepts.

A different spatial division (or merging) is created by the interaction of several sheets and the drawn surfaces on them, which together form a large form, in two cases of the exhibition – Black Diagonal and Red Diagonal ­– a diagonal. Not by filling in gaps, as was part of the concept of Gestalt theory in the 1960s, but by combining units that make the whole visible as a composition. This can be read as a metaphor for society or functional structures, but one can also and above all simply see the space divided in the form of the sheets, but visually holistic.

Two other large-format works, Arena and Concentric Squares, also in several parts, create spaces with a kind of layered depth by repeating scribbled structures in ever smaller or larger formats, each around a center. The space is created on the one hand by the distances between the respective lines and on the other hand by the cloudy nature of the drawing, which makes it impossible to distinguish between the line on and the sheet of paper and the strict distinction between “here line” / “here no line”.

In the typed works in the exhibition, Uriarte places fields typed with the X-sign next to and above each other, sometimes mixed in red and black (in the case of the drawings entitled Untitled [Square Overlay]), sometimes with the seemingly monochrome X-field-drawings (whose shades of color are, however, varied, depending on the use of different and differently worn ribbons). Geometric, rectangular shapes structure the sheets. The compositions (it is justified here to refer to the Latin origin of the word composition, namely: componere [English: put together]) are created in an almost automatic way, which – with regard to the use of space on the sheet – reminds us of Tetris. Seen from above (that is: from an imaginary bird’s-eye view), fields in agriculture or the development of cities can be associated with the X-Fields-drawings. A situation (a field or a neighborhood) sometimes necessarily entails other decisions and developments, or suggests them, so that at the end, over decades – in real space – composition, diverse divisions and combinations take place. For this process Uriarte creates pictorial metaphors with the X-Field-drawings.