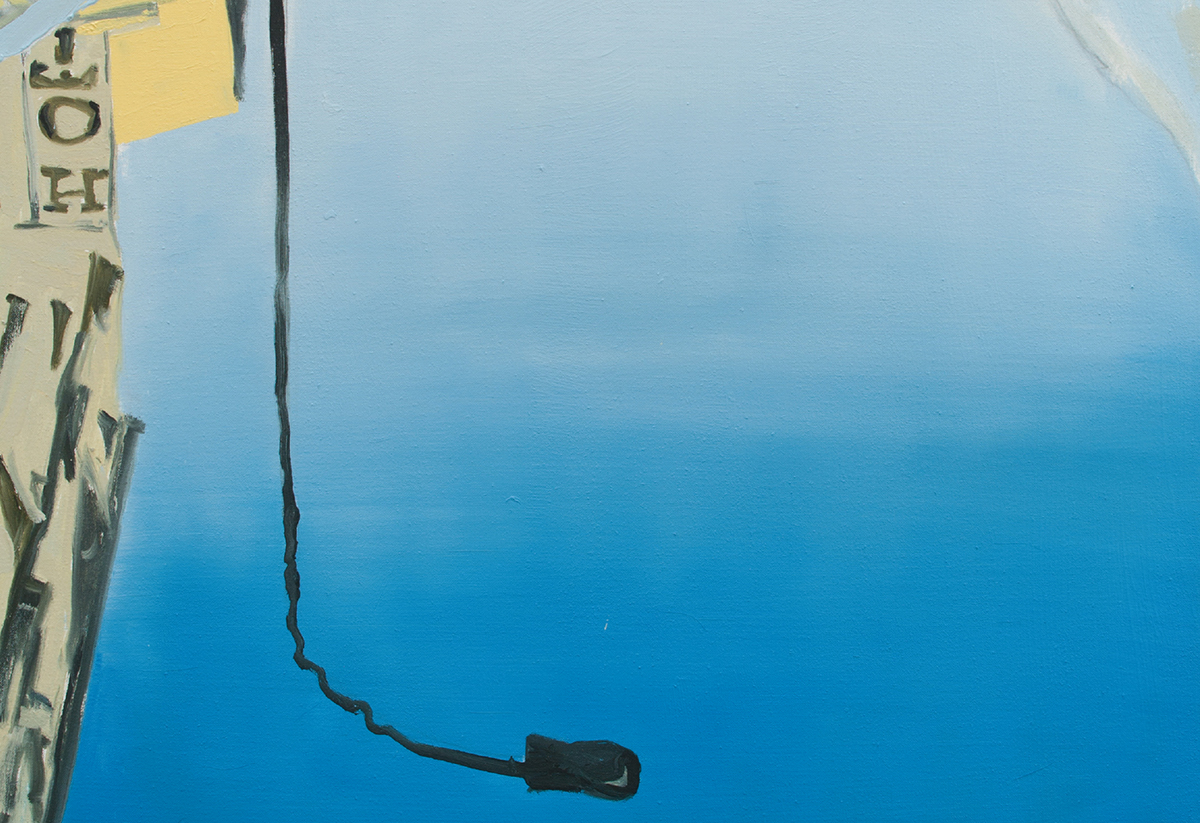 As in his previous exhibitions, the paintings in Koen van den Broek‘s exhibition Tango in Paris are based on photographs taken by the artist himself. This aspect, that he does not use images taken by third persons (and in this way does not delegate a part of the compositional image creation) and, also, that he does not include contents of third persons in his work, is important to him. By using his own images, van den Broek composes – on a formal level – the pictures the way he wants them to be. In the studio, from a large number of photographs, those images are selected that seem to him most suitable for a painting. In terms of content he marks on the world map the places where he has been, creates a visual diary. It is also noteworthy that the process of image creation is extremely extended by the use of the artist‘s own photographs, which are hardly changed, at most somewhat abstracted, and transferred into the paintings: The artworks are not created alone and only in the studio, but already on the road, on his travels and in his head.

As the exhibition title suggests, some of the paintings from Tango in Paris are based on photographs taken in Paris. The trip there in 2021 was Koen van den Broek‘s first after the months of lockdown. It did not take him to the U.S. deserts or major cities in the western U.S., where he had always gone in earlier years, but to another place of longing that had also played a role in his œuvre before.

Paris is not only a place of longing, however, but also the place where the first commercially viable photographic process was invented. It was substantially developed by Louis Daguerre. Technically speaking, he used a camera obscura and exposed an image carrier for his photographs – which he then called daguerreotypes – that captured the image projected onto the back of the pinhole camera, immortalizing it. This brief excursion into the technical history of photography may be permitted, because Koen van den Broek‘s paintings, which he created after photographing images reflected in puddles in Paris, can be seen as related to it in two respects:

For one thing, images that can be seen on the back wall of a camera obscura are always upside down. And this is what the reflected images on the surface of the water of van den Broek‘s painted puddles are too, as if they were images from such a pinhole camera. On the other hand, the images in a camera obscura are snapshots of a very specific moment. Like, again, the images we see reflected in puddles. The very precise location, angle to the puddle, and moment in time, provides us with a very specific image. With each temporal and spatial shift, it changes. Only through the exposure of a light-sensitive surface could photography acquire the index function attributed to it; only with the preservation of the image can the trace of reality be read. With his paintings van den Broek alludes to this transience of the original, quasi-photographic image, not least in that such depicted objects, that have straight edges (such as a lamppost), are painted wavy, thus integrating the movement of the water surface into the image of reality.

Yet another technical aspect of photography plays a role in our exhibition Tango in Paris: the two paintings On and Off show the same rotten truck in the desert, at a moment just before sunset. van den Broek did not move for the two images; rather, they were taken from exactly the same spot shortly one after the other. The difference between the two photographic originals, however, is that one photo was taken without flash, the other with it. The flash, which we do not have built into us and cannot imitate with our human eye, our human, biological conditions, but only in the technical aids that we may carry with us, leads to a completely different image, to completely different things that come to the fore for our eye. The dependence of our seeing, the technical conditionality of our images, van den Broek shows us in this way.